The first novella in the series, The Hidden Monastery, is an introduction to the world, and though someone slow paced starts this epic journey with Captain Katarina Salisbury, who will be the main character of every novella after the Well of Youth. You can read the first few pages here.

Captain Katarina Salisbury of the airship the Iron Lady, and propaganda tool for the Illisian government, has been given a very simple assignment; to go and rescue villagers threatened with avalanches in the far southern Drezusk Mountains.
With unwelcome nobles on her vessel, diminishing part of her fame and good press from the venture, she is determined to do her duty and be done with them as quickly as possible.
Except the fall of the first avalanche reveals something beneath the tumbling snow and rock; a hidden monastery of a dead religion, never seen before this far south on the Illisian continent.
It’s stone doors are opened to reveal a secret, one that had been lost to time. Kat is drawn to the monastery, finding within it a mystery that will change her life forever. But as the weather worsens, and an unforeseen danger moves in the shadows, she is forced to make choices; for herself and the future of the Iron Lady.

The first novella in the series, The Hidden Monastery, is available from your preferred ebook provider in the below links; 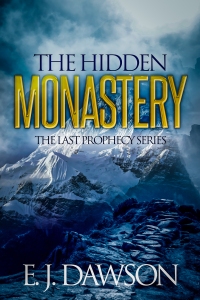 The Hidden Monastery: The Last Prophecy Series Book 1 by E. J. Dawson is an exciting start to what promises to be a creative and intellectual steampunk series.

Captain Katarina Salisbury of the airship the Iron Lady is also a propaganda tool for the Illisian government. Her latest assignment, to rescue villagers from impending avalanches in the Drezusk Mountains, seems straightforward, until Kat finds out she’ll be escorting nobles on her ship, threatening to take away the media attention from the captain. The trip changes drastically when their efforts to steer an avalanche exposes the entrance to a hidden monastery.

In the beginning, it’s clear that Kat has her own agenda: to create a fascinating and exciting persona the people will love. The author doesn’t hide the fact that the government is using Kat for propaganda and Kat enjoys the spotlight, but she only desires positive attention. However, when one lives in the public eye, it’s difficult to maintain one’s image. Given today’s selfie culture this is an interesting way for the author to explore and critique our society without getting onto a soapbox.

Luckily for the reader, the author understands that Kat as a character needs to grow to maintain the reader’s interest and support. While Kat has a temper and a strong desire for fame, she also has courage and a good heart. Flawed characters make for fascinating reading. Internal personal struggles resonate because most readers battle them every day. Kat isn’t the only flawed character in the book and watching her interact with a strong supporting cast enhances the overall reading experience.

However, the story isn’t solely driven by the characters. Dawson’s vivid writing brings Kat’s world to life. Steampunk allows readers to disappear into unusual worlds with technology that is simultaneously advanced and old-fashioned. This dichotomy creates an unusual place that also seems familiar – a place readers want to explore, and this maintains engagement.

To round out the success of the author’s first book in the series, the hidden monastery provides enough of a mystery to keep the reader’s attention to figure out exactly what’s going on. The hints dangled throughout the book suggest that the big reveal will be a game changer, one that won’t disappoint in the wow factor and one that will keep the momentum throughout the series.

First books in a series are somewhat tricky since the author needs to tell a story and lay the foundation for the continuing books. It’s not an easy line to walk. Dawson handles it brilliantly. This installment is an exciting and satisfying read. Yet it’s easy to picture that there’s so much more to be revealed by the author.

The writing is solid. Occasionally a silly error pops up that most readers will either miss in their eagerness to unearth the mystery or they’ll forgive for a first-time author. Overall, this first book hits all the right spots. Her new fans will hope she doesn’t enjoy this success for too long and gets back to work on the next book.