The Dark Side of Self Publishing 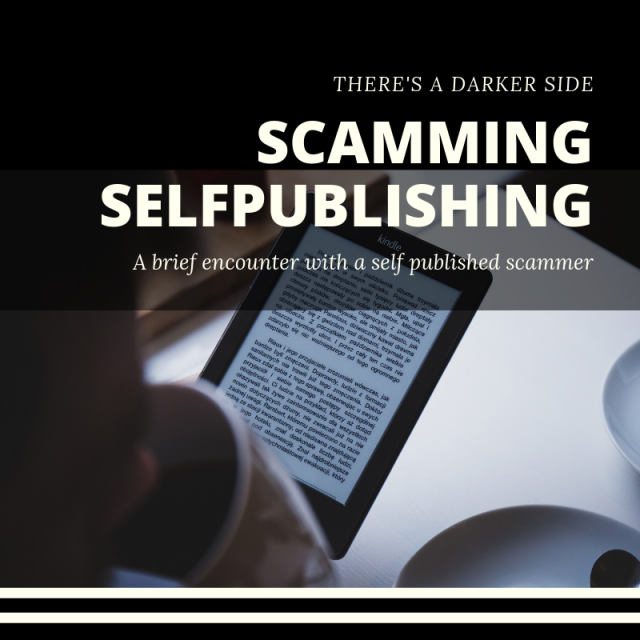 Because if you haven’t yet, and you are a self publisher you may have made a colossal mistake. I write this article not to identify the scams but to make it clear that its likely someone you know is using scams to increase their self-promotion.

There are a host of articles out there identify the tricks that some services use to lure self publishers into getting their name out there, at any cost.

Writers buying their own books from bookstores to put themselves on the NYT bestseller list.

Dreadful isn’t it? The lengths that people will go to just to sell their work. But not you, right? Not me.

But these people exist in our community, and I was unpleasantly surprised when one of these people turned out to be someone I knew.

He was always online.

I was happy for what I believed to be his genuine success.

I was wrong. He cheated.

For the sake of this blog post we’re going to call him John.

The article was about using racks of phones to download KU books and spin through them giving them a false sense of popularity and pushing John’s book to the top. It might have hit the radars sooner if he’d been in a key genre, but he wasn’t, it was a niche, a lucrative one but a niche nevertheless. Since they were pushing it to the bestseller listing the rest of the sales took care of themselves once he was at the top of his genre. People pay attention to those lists, not just the author so they can give themselves the hollow credit of calling themselves an Amazon bestseller.

But John’s “self-made success” lie got called out.

At the time the comment went online, the US was asleep. As an Australian I was not, and as Europe was waking up I watched this disaster of lies unfurl.

Of course the answer was no.

“How did this happen?”

“Someone is making things up…” At this juncture the conversation became garbled posts that made next to no sense. Mostly denial, but it was all so chaotic I couldn’t see clearly. I knew John.

I couldn’t believe the damage this would cause, it was catastrophic.

I contacted the facebook group’s administrator, I listened to John’s defence.

I wanted to believe, knew it wasn’t fair to think otherwise but then the article made too much sense to be ignored. I think I read it fifty times in the space of two hours.

It dug into the patterns of John’s success with an accuracy that was startling spot on. False accounts, fake reviews, but the worst of all was that the Amazon bestseller became meaningless to me because I knew now it could be bought. Even if John wasn’t guilty.

John never confessed, the outpouring against him created a slew of 1 star reviews and his reputation was charred. I wasn’t sure, but the implication was too strong to be ignored. His actions and mannerisms at the time spoke of guilt. He was someone I worked along side, helped promote, I’d been a mindless guppy for someone who was fucking the system.

It was tempting to give up writing. I didn’t.

I saw John the other day online. In a different group, but this time the other signs where there, ones I could now recognise. Bought Twitter followers, loads of five star reviews against new books that were the same garbage spilled out again. It was the wake up call I’d been missing for some time. One that reminded me I was in this for the writing, and that writing my books needed to be enough.

I wanted to believe John, but the fact of the matter was that I’d watched his success with disbelief for months. Because I’d been ignoring a truth for far too long.

There are a host of self-published books which do not have any redeeming features. Its why I review books honestly, why I’ve segregated my self-published reviews and my traditional ones.

I’d picked up one of John’s books and hadn’t been that impressed but figured it just wasn’t for me.

That was the last time I let a self-published book I couldn’t read simply “not be for me.”

I can and will read anything with a good hook and this book was garbage. Worse still, John had almost a dozen books just like it, all the same trash but someone was buying it.

After all, they’d been paid to. And now I can see John’s twitter account with the words “Amazon Bestselling Author.”

If you ever needed a reason to wonder why there are people out there who hate self-publishing then this is it.

Before someone offers you, for the right price, the success to an Amazon bestseller, ask yourself, for those fickle moments of fame that won’t be remembered, is it going to be worth fucking over every other author you’ve ever befriended? Because that’s what these scams do.

And it’s tempting to give up when you realise what lengths people will go to.

I didn’t give up.

You know what I did? I became a better writer, I wrote better stories. I review ceaselessly and with honesty for a damn reason!

I always have at least five indie books on my phone ready to read. I download trad books that pull my interest to keep my reading fresh.

3 Comments on “The Dark Side of Self Publishing”